Get started for free

Habitual is a habit tracker that helps you form great habits, reach your goals and get your life in balance. 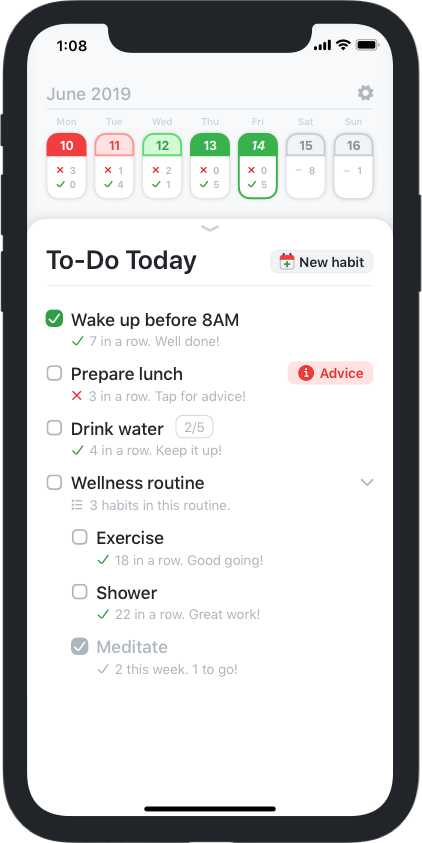 Stay motivated by your
habit streaks 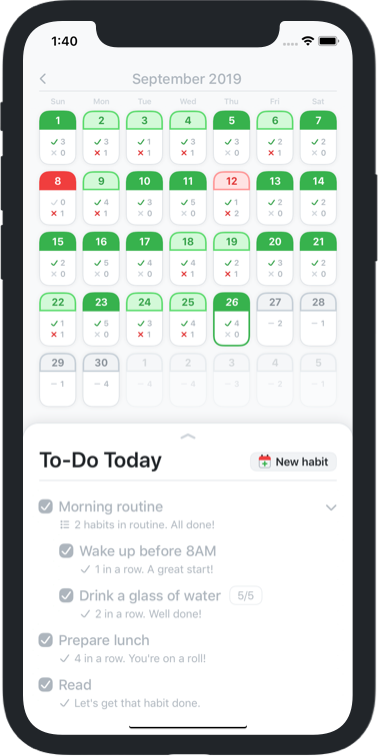 A better you one
habit at a time 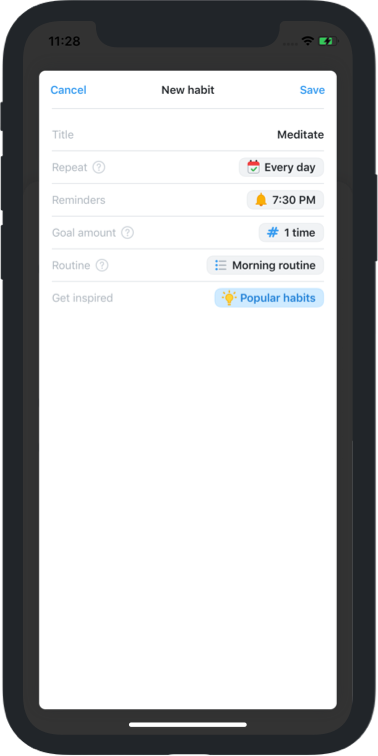 Specific days, interval,
or the amount 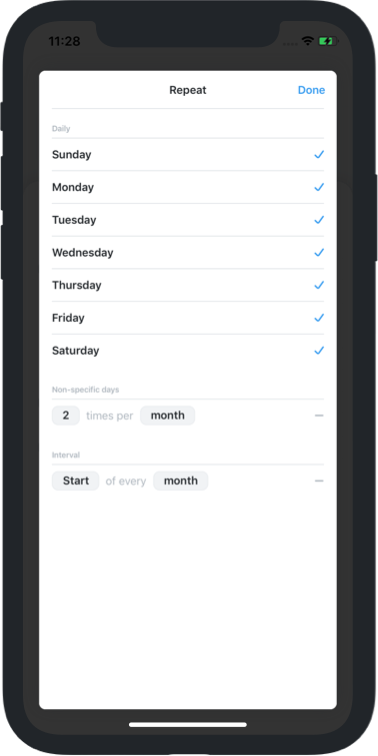 Stick to your habits
with reminders 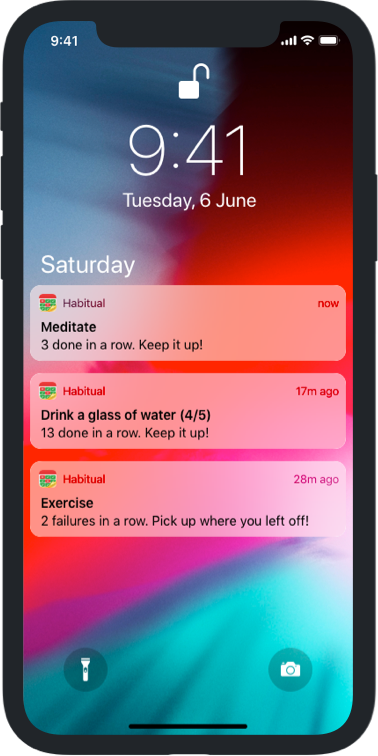 Learn the science
behind it all 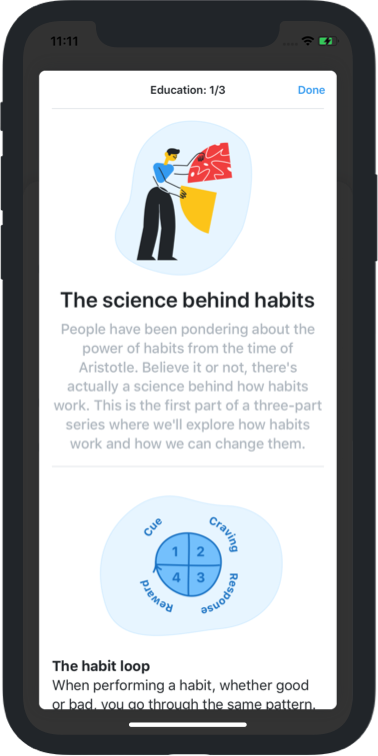 Rest your eyes with
our dark theme 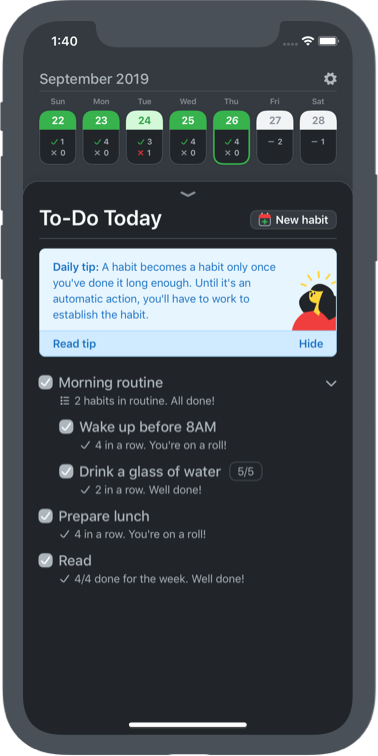 Keep your habits
secure and private 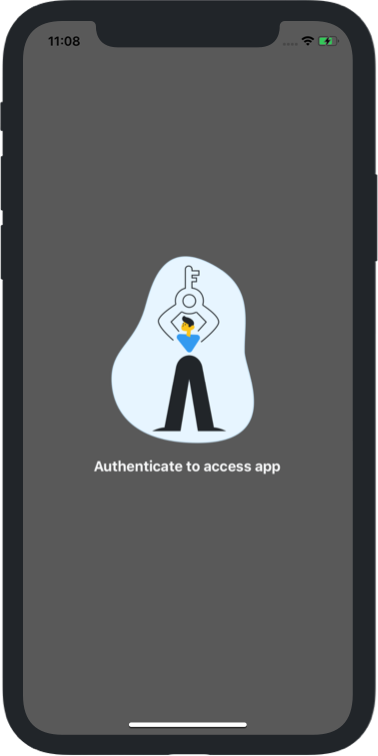 Signup to keep
your habits safe 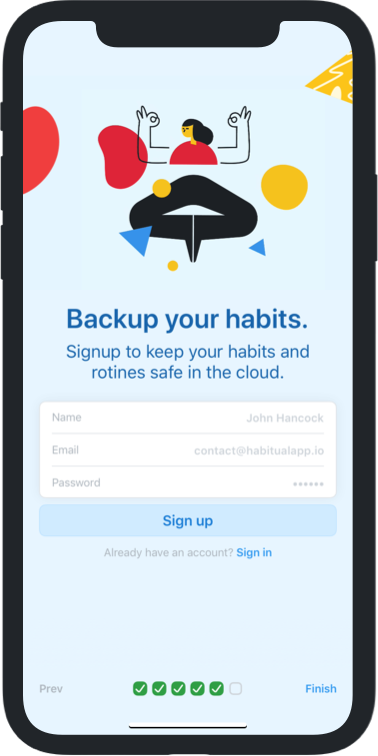 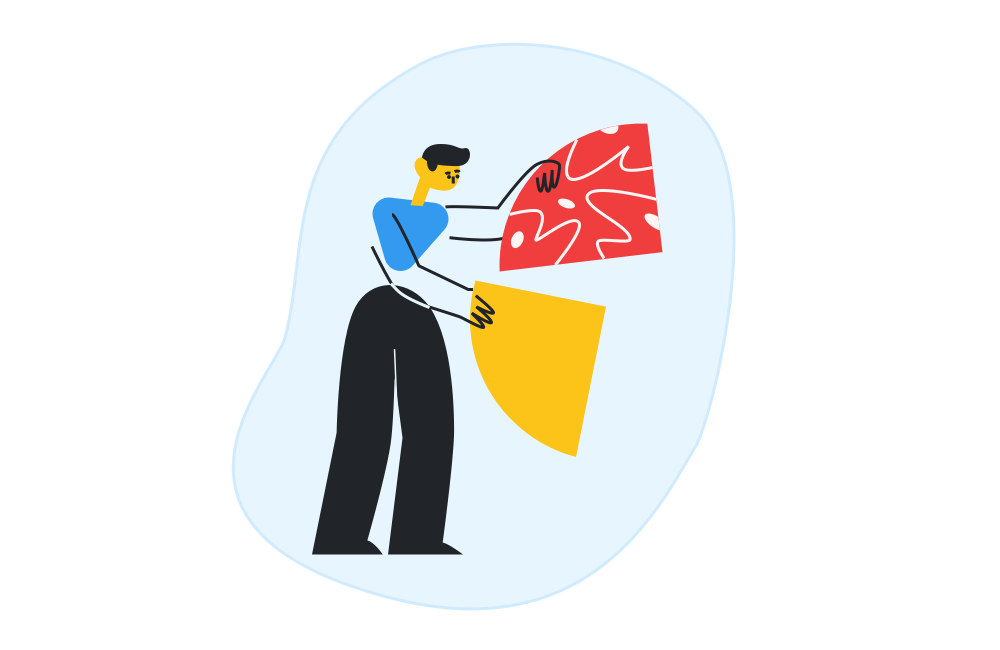 The science behind habits

People have been pondering about the power of habits from the time of Aristotle. Believe it or not, there's actually a science behind how habits work. Here we'll explore how habits work and how we can change them. 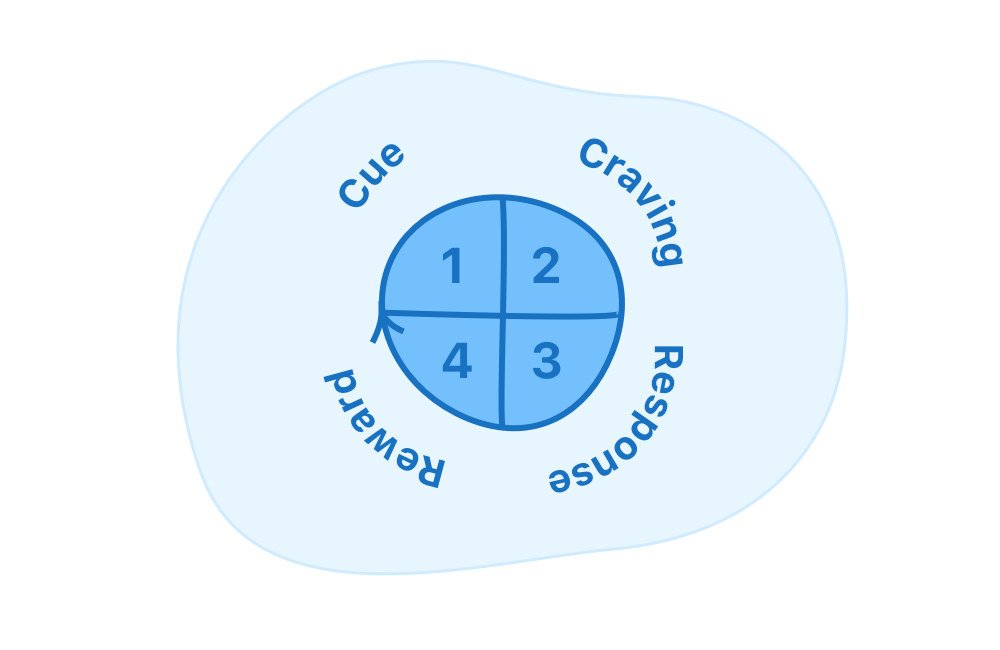 When performing a habit, whether good or bad, you go through the same pattern. This pattern can be summed up in four steps. These four steps can be described as a feedback loop.

Myself, I have a habit of playing too much solitaire. Actually, I've played so much solitaire that I ended up creating a website where you can play solitaire online. A habit loop for my solitaire habit might look like this:

Something, mostly an external thing, suggests there's a reward to be found. In this case, it might be the solitaire bookmark I have in my browser.

A motivation builds up that makes it difficult for you to ignore the cue. My fingers are itching to play a game of FreeCell or Spider Solitaire.

The craving is acted upon. I click that darn bookmark to get my daily dose of solitaire.

Satisfaction is felt when the craving is fulfilled. In this case, I'm thrown into an exciting solitaire game.

The above example might not be the habit you're trying to create, but good habits work just the same. You might come home from sitting at the office all day and notice the running shoes in your hallway. You get a craving for the satisfying feeling of doing physical exercise. You put on the running shoes and get the satisfying feeling of doing physical exercise.

You go through the pattern above whether you've done that action one time or many times. Which is why the pattern can be described as a feedback loop or habit loop. This is the loop we're trying to take advantage of when we're trying to build good habits or get rid of bad ones. 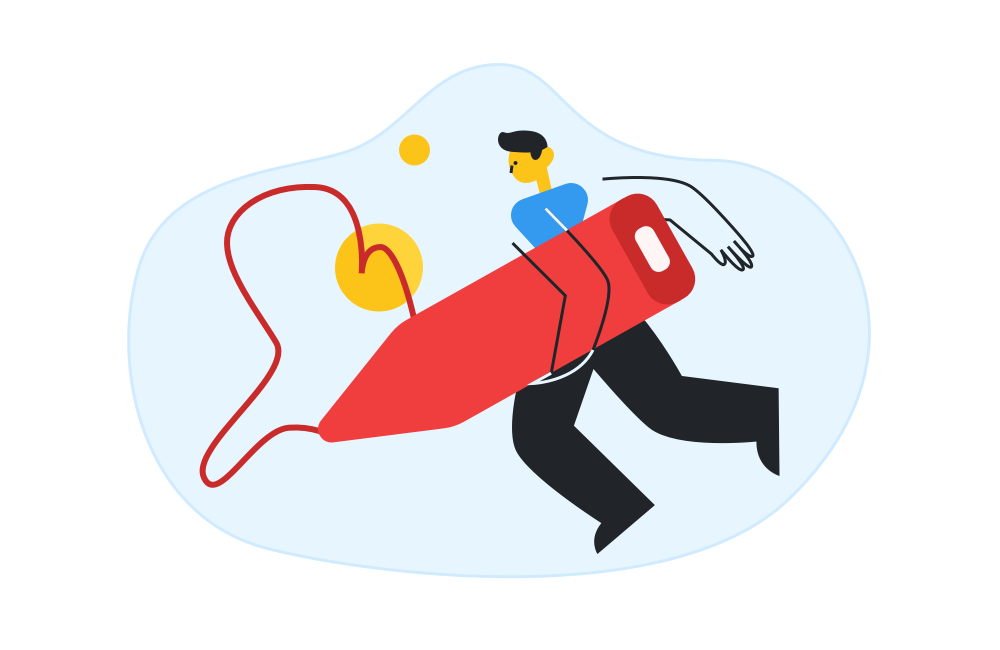 A system for changing habits

People have a hard time creating good habits because they don't know how habits work. With that knowledge, we can set up a simple system that'll make it easy for us to stick with our habits. Let's explore how good habits a build and how to get rid of bad habits. 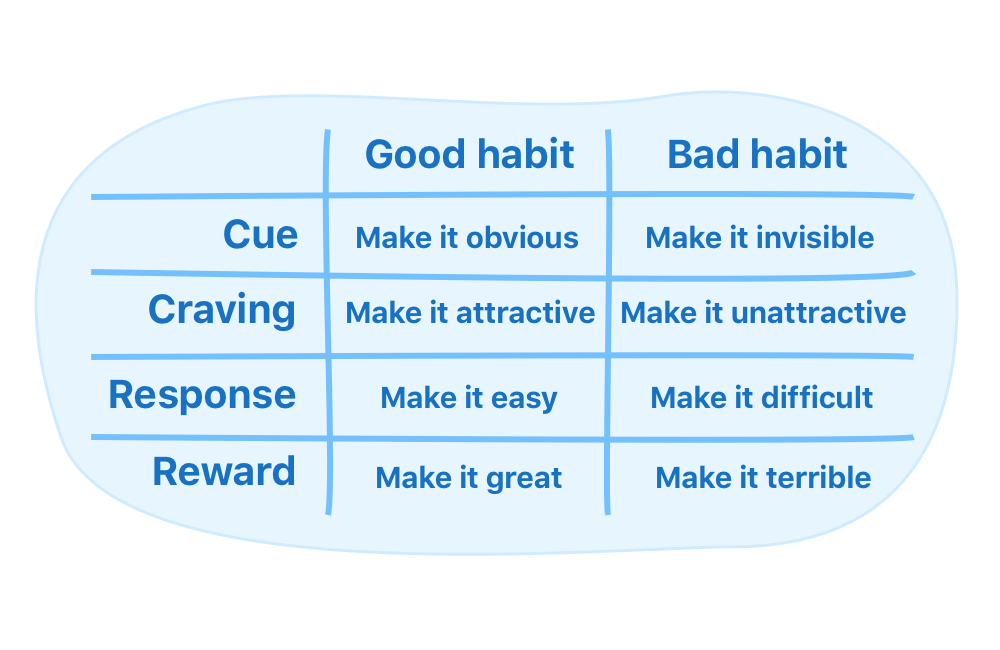 1: Make the habit obvious to trigger the cue

You only have a certain amount of willpower you can spend. After you've spent it, you'll start to give in to the cues you're exposed to. So you'll want to make the cues for your good habits obvious and your bad habits invisible. To stop drinking soda, get rid of soda in the house, to make the "drink soda" cue invisible. Building a good habit can also be helped by changing your environment. If you want to start running, keep your shoes in the hallway along with your other running gear, so it's always accessible and visible. You can also stack habits on top of each other, so when you've done one specific habit, like brushing your teeth, you go straight on to another habit, like making your bed. Another helpful thing you can do is to be specific when you want to do your habit. In Habitual you can set reminders for your habits, to get a notification (or cue), that it's time to do the habit.

2: Make the habit attractive to build the craving

Habits aren't always inherently pleasurable, and when we do things that aren't pleasurable, we simply spend our willpower. There are a few things you can do to counteract this. Depending on the task, you might be able to do something pleasurable while you do it, like listening to music you like while doing exercises you don't like. This gets the brain to associate the habit you otherwise don't like with something you do like. You can also reward yourself for doing the habit, which gives you a nice "carrot" to look forward to in the end. You might even be able to swap a bad habit with a good one, like going for a run instead of drinking to burn off steam. To quit a habit, make it unattractive.

3: Make the habit easy to make the response simple to act on

The easier an action is to do, the more likely it is that you'll do it. Remember, that you only have a certain amount of willpower and once you've spent that, you'll have a hard time doing actions you otherwise wouldn't do. So if an action is hard to do, chances are that you won't do it. Try to reduce friction in the habits you want to build. For example, go to the gym on your way home from work, when you're already on the move. Forget about doing things perfectly when you're building trying to build a habit. It's much more important that you're doing your habit consistently than you're doing it perfectly. When starting a new habit, try not to aim too high. If possible, try to keep the duration of your habit below 2 minutes. Doing things consistently is everything when building habits. To get rid of a habit, try to add friction. For example, if you want to limit the time you spend on social media, then delete them from your phone, so you have to use your computer.

4: Make the habit rewarding so you'll want to do it again

The first three steps increase the chances that you'll perform the habit you want to build. Making the reward bigger for doing those actions, make you more likely to want to repeat them, thus creating a lasting habit. The easiest way to make the habit feel rewarding is to use a habit tracker like Habitual. After you've started a habit, you'll see a timeline of rewarding checkmarks, each indicating a day where you've done all the habits you set out to do. Creating this chain of accomplished habits becomes a rewarding visual cue that you'll have a harder time breaking. 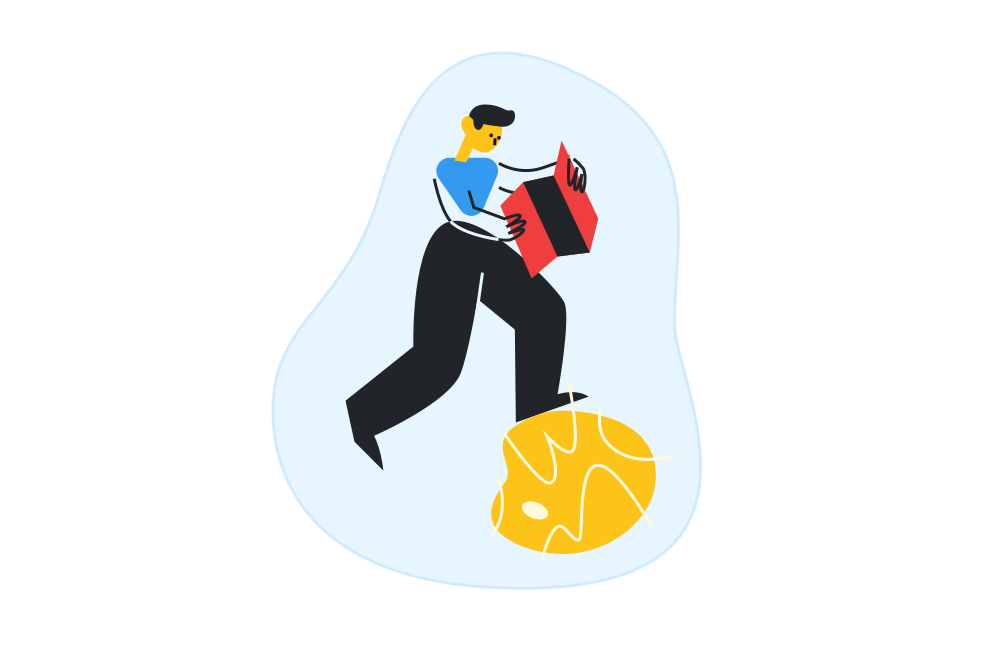 There are lots of tips and tricks you can apply when you're changing your habits. Here we've gathered some of the best knowledge available. 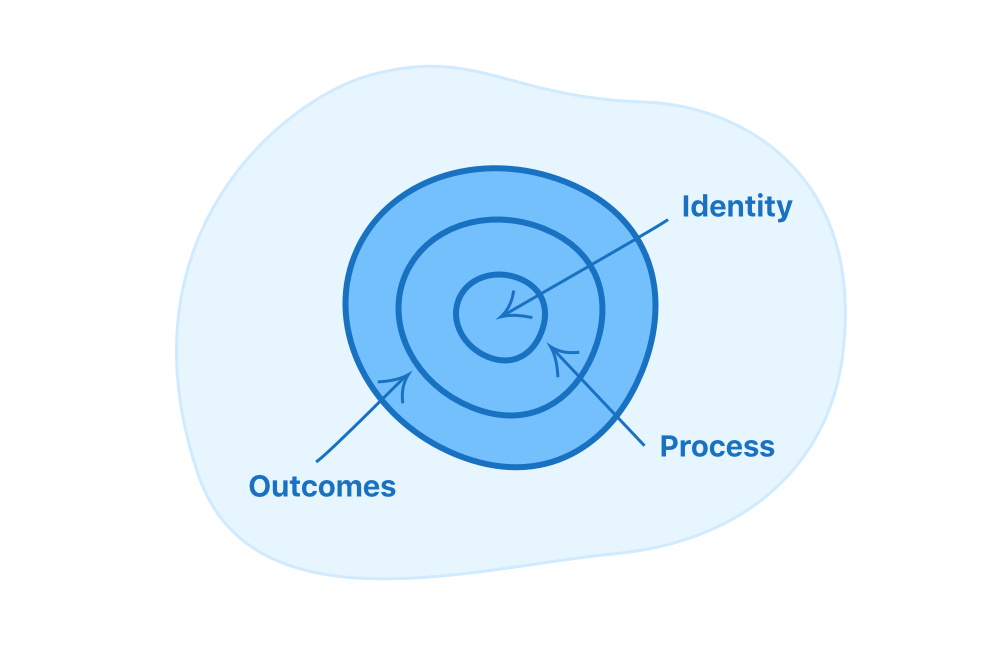 Your habits shape your identity and vice versa 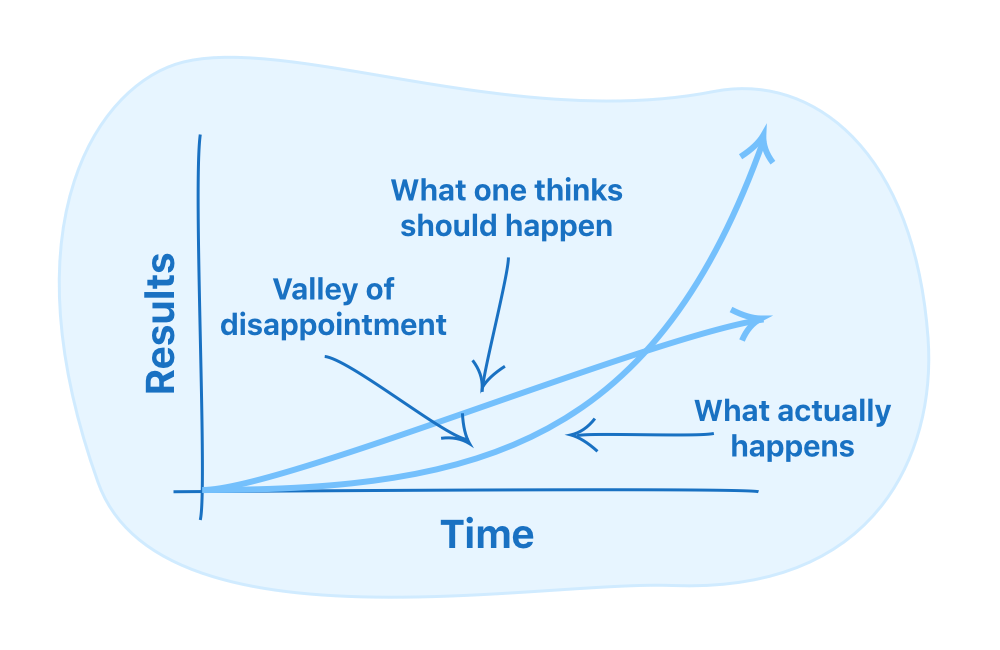 Focus on systems - not goals

When people look to make a change in their life, they tend to focus on the change they want to achieve, the goal, and often forget about the system that will lead to that goal. This is one of the main reasons people have such a hard time changing their habits. Systems are the processes that will lead you to your goal and setting up a system that will help you create a stable habit is vital if you want to make a change. People often think that the process of creating a habit is a linear experience, where it's actually an exponential one. If you've ever tried to create a new habit, you've probably experienced the difficulty of doing it consistently at the start. That's because you're in the "valley of disappointment" and don't feel the full benefits of the results yet. 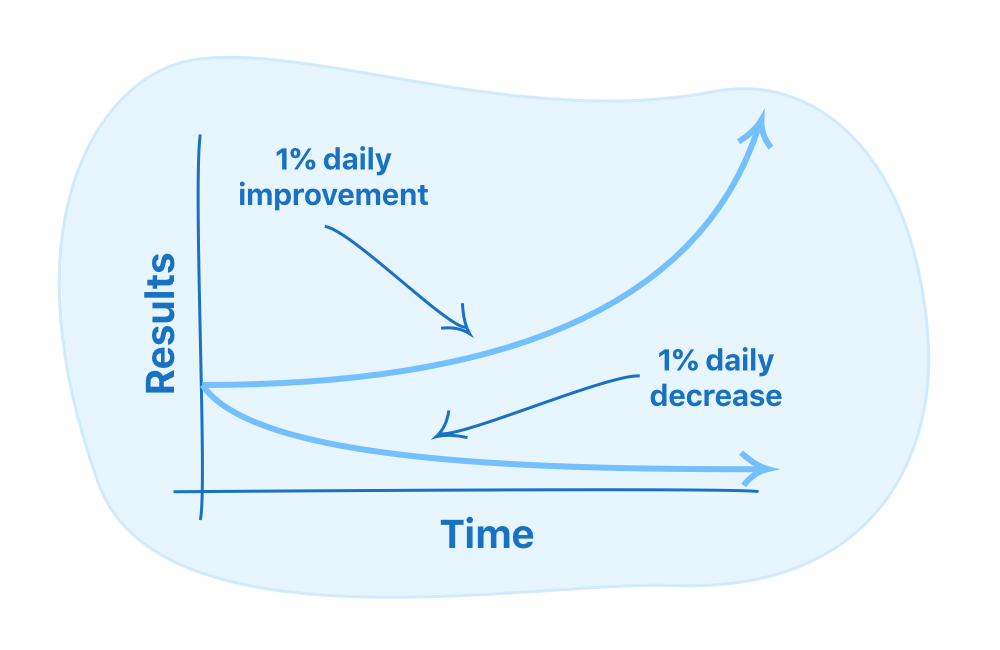 Becoming one percent better at something each day doesn't sound like a lot, but that one percent compounds over time and becomes exponential growth. Becoming one percent worse at something each day has a similar effect in the opposite direction. That's why when you're trying to create a new habit, all your focus should be on doing that habit as much as possible. In other words, it's quantity over quality. It's better to meditate 10 minutes every day than 1 hour at the end of the week if you want to get into the habit of meditating.

Doing habits one after another

One little trick you can use to lure yourself into doing your habits is to stack them up against each other. For example, you could have a morning routine, where you'd brush your teeth, and after that, you'd prepare your lunch, and after that, you'd meditate for 10 minutes. Finishing one habit will often give you a kick that will make you want to start another. 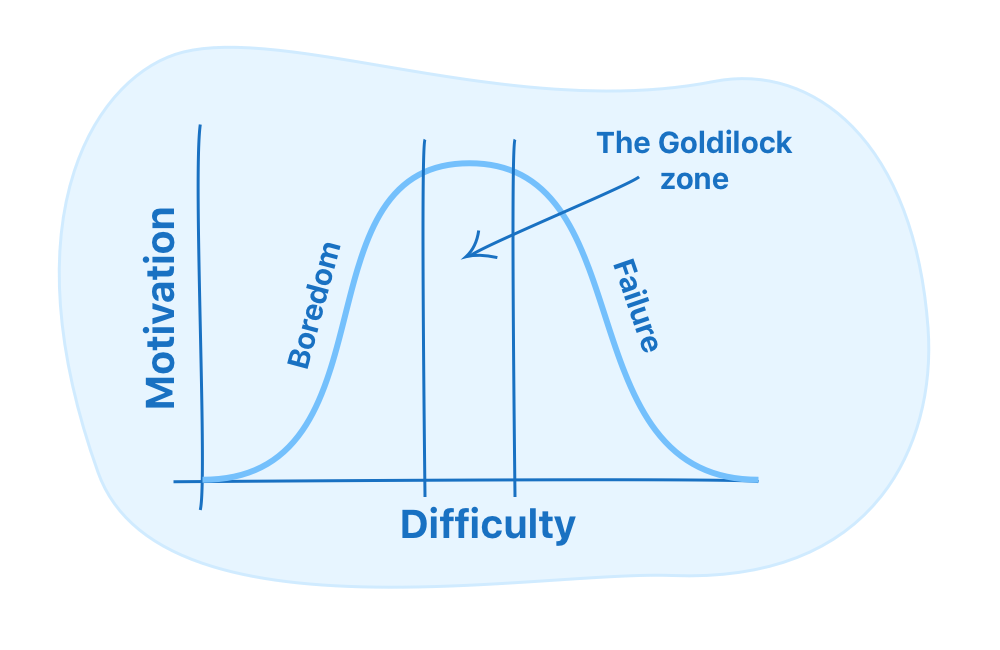 When setting up the habit you want to build, make sure to think about the Goldilocks rule. It's a rule, or guideline, that describes the sweet spot for human activity. In a nutshell, it states that if people are too bored or too challenge by what they're doing, they not as likely to do it. In other words, when starting out a new habit, you don't want to set the bar too high or too low. 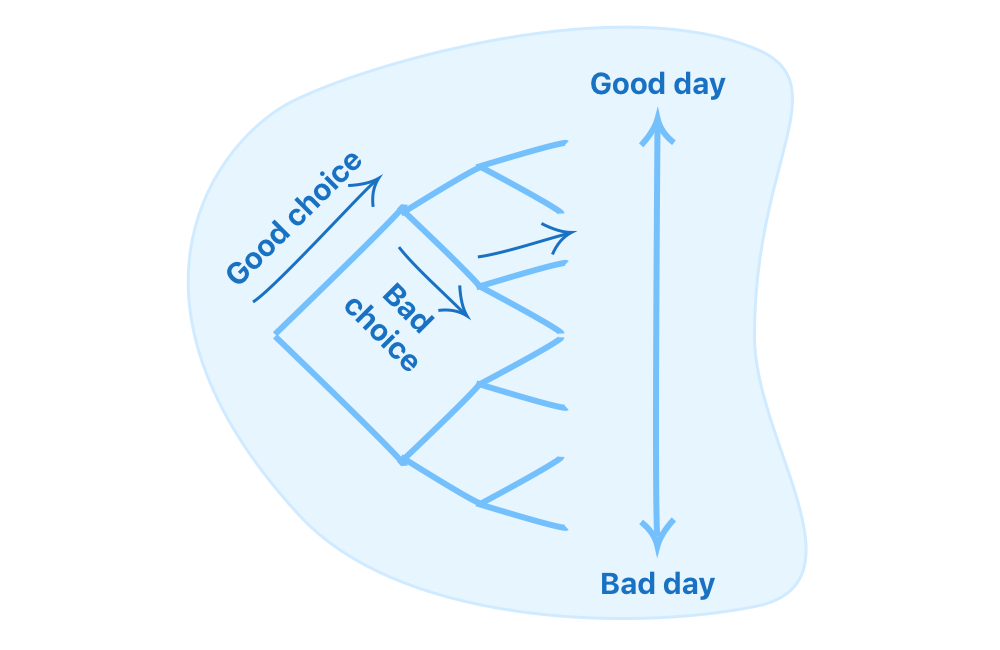 A good day often starts with a few vital decisions

The US Marines are taught to make their bed every morning. This might seem like a silly thing to spend time on, but they've implemented this habit for a very good reason. Whether your day becomes a good day or a bad day often comes back to a few vital decisions at the start of the day. You can look upon it as a decision-tree that grows larger as the day passes. Making the right decisions at the beginning of the day will not only give you a headstart making that day a good day, but it will also give you the kick you need to keep making the right decisions during the rest of the day. 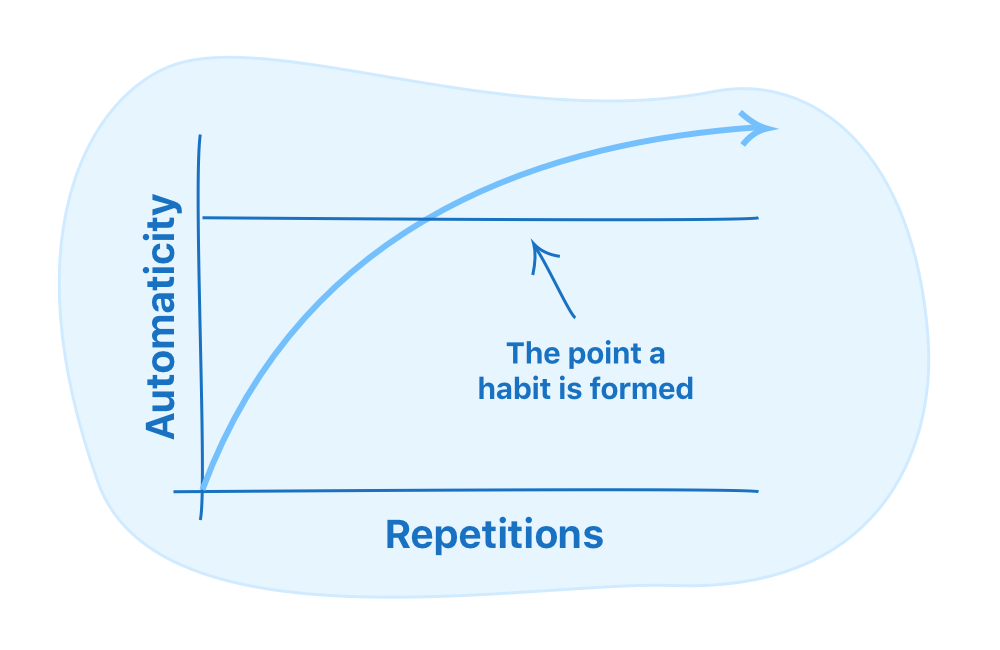 A habit isn't formed in a day

On paper, you might form a habit from one day to another, but in reality, it takes time to form a new habit. When an action becomes so automatic for you that you don't really give it any thought before doing it, then it's a habit. Getting to that point of automaticity is something you build up by doing that particular action again and again. Once you've done that action enough times, it becomes a habit.

Habitual is a habit tracker that helps you form great habits, reach your goals and get your life in balance.

ContactPrivacy policyTerms of use